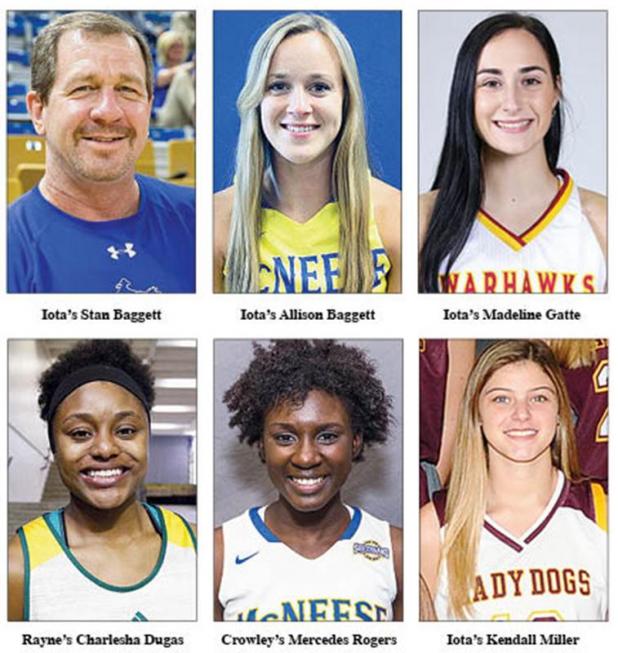 To say the last decade in prep girls basketball in Acadia Parish was dominated by the Iota Lady Dogs would be an understatement.
Iota was the most successful girls basketball team in the parish by far over the last 10 years, compiling an overall record of 234-97, winning five district titles and finishing as the league runner-up the other five years.
The Lady Dogs made the playoffs each season, claiming the Class 2A state runner-up trophy in 2012. They made two semifinal appearances and two trips to the quarterfinals in the decade.
So it should come as a surprise to no one that the Lady Dogs dominated the 2010-2020 Acadia Parish All-Decade team that was released today.
Headlining the team are the father-daughter duo of Stan and Allison Baggett.
The elder Baggett coached just two years in the decade, but they were two good seasons. In 2011, he guided the Lady Dogs to a 26-8 record and finished 33-4 in 2012, losing a close game to perennial power John Curtis in the Class 2A title game.
Prior to 2011, Baggett had a historic 4-year run with the Lady Dogs as he guided them to the state tournament from 2005-2008. His teams, led by twin daughters Ashlyn and Caitlyn Baggett, lost to Many in the 2005 semifinals and the 2006 finals before beating them in 2007 for the Class 2A title. His 2008 squad defeated Capitol in the Class 3A title game.
Coach Baggett retired after the 2012 season and moved on to become the principal at Estherwood Elementary.
In his 25-year coaching career, coach Baggett’s teams won two state titles, played in the title game four times and were part of six state tournaments.
Allison Baggett also played just two seasons in the decade, 2011 and 2012.
In 2012, Baggett averaged 21.5 points, 5.2 assists, 6.1 rebounds, 2.8 blocks and 2.7 steals in leading the Lady Dogs to the Class 2A title game. She was named the MVP of the All-District, All-Acadia Parish and Class 2A All-State teams.
During her junior campaign in 2011, Baggett averaged 23.7 points per game to go along with 8.8 rebounds, 4.4 assists and 3.2 blocks. She knocked down 90 shots from beyond the arc that year.
Baggett finished up with 2,613 points in her career at Iota and went on to sign with McNeese State to join her sisters Ashlyn and Caitlyn.
At McNeese, Allison knocked down 184 3-pointers during her four-year career. She wrapped up her career with 1,573 points and 341 rebounds.
Also making the All-Decade first team were another pair of two-time All-Acadia Parish MVPs in Iota’s Madeline Gate and Rayne’s Charlesha Dugas.
Gatte was the 2017 and 2018 All-Parish MVP. She was also a first-team selection in 2016 and again in 2014, when she was an eight- grade starter at Northside Christian.
As a junior in 2017, Gatte led the Lady Dogs to the Class 3A semifinals by averaging 16 points and five assists. She averaged 17.5 points, 7.5 rebounds and 6.5 assists during Iota’s 4-game postseason run.
In 2018, Gatte averaged a double-double on the year with 21.7 points and 11 rebounds per game.
Gatte went on to play one season at Southwest Mississippi Community College before transferring to UL-Monroe where she will be a junior this season.
Dugas was the All-Parish MVP in 2015 and 2016 and was a first-team selection in 2014. She was the District 3-4A MVP her final two years at Rayne where she averaged 21.3 points, 5.1 rebounds and 5.1 steals as a senior. The Southeastern signee set the school record at Rayne with 2,031 points and was a four-time All-District selection and a two-time All-State selection.
At Southeastern, Dugas ws the first Lady Lion ever to be named Louisiana Freshman of the Year by the LSWA in 2017.
The rest of the first-team is comprised of Crowley High’s Mercedes Rogers and Iota’s Kendall Miller.
Rogers was an All-Parish selection for three years, earning MVP honors during her senior season in 2013.
The McNeese signee logged a double-double during her senior year by averaging 14 points and 11 points per game. She also averaged six steals, three blocks and two assists.
Rogers, who is now a coach at her alma mater (Crowley High), averaged 8.3 points, and 7.5 rebounds during her senior year with the Cowgirls.
Miller was named to the All-Parish team three straight years, including earning MVP honors in 2019 as a junior.
An LSUE signee, Miller averaged 12.6 points, eight rebounds, 3.4 assists and 3.1 steals per game during her junior MVP season. She finished her career at Iota with 1,120 points, 575 rebounds and 265 assists.
The All-Decade second team is also a very talented group and includes a pair of All-Parish MVPs in 2020 winner Avery Young and 2014 standout Sam Lyons.
Young was tabbed to the All-Parish first team last year as a freshman at Iota prior to earning top billing in 2020. This year she averaged 16.9 points, 7.9 rebounds, 5.6 assists and 3.6 steals in helping lead the Lady Dogs to a Class 3A quarterfinal appearance.
Young was also selected to the All-District first-team and she made the Class 3A All-State second unit.
Lyons, a three-time All-Parish selection, helped lead Notre Dame to the quarterfinals in 2014 by averaging 12.1 points, 7.4 rebounds and 4.3 assists. She went on to play collegiality at LSU-Shreveport and Centenary College.
Alyssa Williams, Madelyn LeJeune and Alex Miller, all Notre Dame graduates and three-time All-Parish selections, round out the squad.
Williams, a Class 2A All-State second-team selection in 2018, averaged 16 points and 13 rebounds per game her senior year. She signed with and is currently a member of the University of Montevallo Falcons basketball team.
Miller averaged 12.4 points, 8.3 rebounds, 5.7 assists and 4.1 steals during her senior year in 2013. She went on to play four more years at LSU-Shreveport.
LeJeune averaged 17.1 points, 6.1 rebounds and 1.4 blocks during her senior season in 2015 before signing with LSU-Eunice.