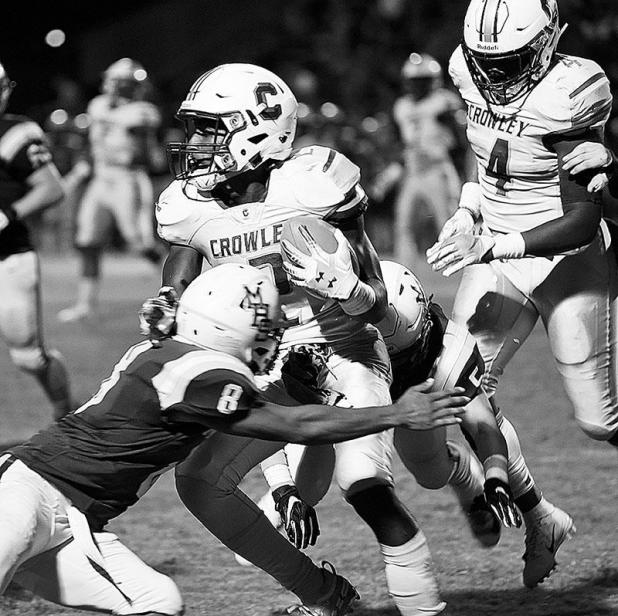 THE POST-SIGNAL / Josh Dugar
Crowley High’s Chris Moore runs past a pair of Marksville defenders during the Gents’ 62-38 victory over the Tigers last week. The Gents will play host to the Washington Marion Charging Indians tonight at 7 o’clock.

At first glance, Washington-Marion doesn’t seem like a team that would give the Crowley Gents much trouble.
The Charging Indians are currently 1-4 on the season and have allowed an average of 47.2 point per outing.
However, a look deeper into the Indians’ schedule provides the answer of why they have struggled.
The Indians have suffered lopsided losses to Class 4A’s No. 1- and No. 2-ranked teams in the power ratings in Leesville (48-12) and Carencro (71-22), respectively.
They have also suffered a 34-12 setback against Class 5A traditional power Sam Houston and dropped a 43-16 contest to Jennings last week.
Not surprisingly, Crowley High coach Jeptha Wall, whose Gents play host to the Indians tonight at 7 o’clock, is not looking past his Week 6 opponent.
“Their record is kind of deceiving,” said Wall of the Indians, who dropped down from Class 4A to 3A last year. “They have lost to some really good teams. With the athletes that they have over there, they really are a scary team.”
The Indians primary threats in their spread offense are quarterback Devin Williams, running back JaThan Royal and wide out William Carswell.
Williams, a 5-foot-10, 176-pound junior has the ability to hurt teams with both his legs and his arm. Against Jennings he broke free for a 53-yard touchdown run early in the game and he has connected with Carswell (6-1), 170, Sr.) for a number of big plays during the first half of the season.
“The quarterback is a really good athlete and he runs well,” said Wall of Williams. “We’re going to have to pick and choose when we’re going after him and when to try and keep him bottled up. He’s very mobile and he does keep his eyes down field, so that will present a problem if we can’t keep him boxed in.
“And they have one really good receiver (Carswell) and some other guys that they throw some bubbles to. It’s kind of like last week, playing a mirror.”
Royal (5-7, 173, Jr.) has had his moments and has gone for over 100 yards in nearly every game thus far.
The Gents will counter with an explosive offense of their own, led by senior running back Obadiah Butler.
Even with two offensive lineman sidelined last week due to injury - Bryce Prather and Josh Richard - the Gents’ offensive line opened up huge holes for Butler, who rushed for a season-high 349 yards and five touchdowns.
Prather, who was injured in the Cecilia game, may be lost for the season with an ACL injury and Richard is likely out again this week.
The Gents mixed in six players on the line to fill the void of the two injured starters - Tyrell Thomas, Kylar Rawls, Allen Wulf, Abel Hernandez, Kendal Harmon and Sean Ordogne.
Overall the Gents posted 548 rushing yards and 102 yards through the air in last week’s 62-38 victory over previously-unbeaten Marksville.
This week, however, the big plays will likely be limited against the Indians according to Wall.
“I would say that defense is their weakness, but they recover with so much team speed,” said Wall, whose team scored nine touchdowns from more than 19 yards out last week. “All those big runs that we popped against Marksville probably won’t be there this week.
“We will have to be able to control the ball and put some drives together. If we pop one, it might be 20 yards.”
Defensively, the Gents struggled early on against Marksville, allowing five touchdowns in the first two quarters and trailed 38-34 at the intermission.
“For a while there, it looked like we were just going to go back and forth the whole night,” said Wall of last week’s game.
Fortunately, Crowley’s defense rose to the occasion in the second half and forced three crucial turnovers as the Gents pitched a shutout in the final two quarters.
After taking the lead for good at 40-38 in the third quarter, CHS’ Kylar Rawls stripped running back Daniel Miller near the goal line and Rodney Goodley recovered the ball to thwart a Marksville scoring threat.
The Tigers threatened again, reaching the CHS 1-yard line before Jonteyvon Marks forced another fumble that was recovered by Harmon.
Marks also logged an interception in the fourth quarter and returned it 30 yards for a touchdown.
Tyron Goodley led the Gents’ defensive effort with 11 solo tackles and 10 assists to go along with two pass breakups. Rodney Goodley added nine solos, one for a loss, and two assists. Tyler Carrier also had an interception in the first half.
“We bent, but we didn’t break on defense last week and forcing those turnovers in the second half was big,” said Wall. “This week, we need to try and jump up on a team like this and put pressure on them to make some mistakes.
“This one is big for us. Each week is crucial so we have to just keep preparing and getting better each week.”