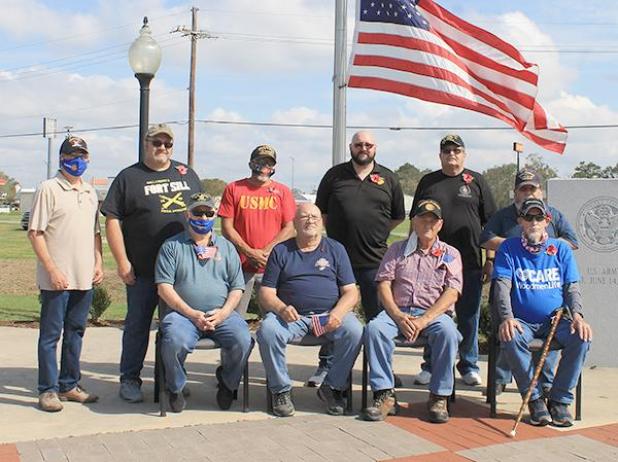 VETERANS HONORED DURING PROGRAM - Veterans Day was observed the morning of Wednesday, Nov. 11, at the Rayne Veterans Park when veterans were honored during a program hosted by the Rayne Chamber of Commerce, Rotary Club of Rayne and the City of Rayne. Among the veterans in attendance were, seated from left, Bob Landry, Raylin Alleman, Michael Pastor, Robert Comeaux; standing, Jared Lawless, Patrick Pellerin, James Montgomery, Brandon Autin, Kenneth Autin Sr. and Lee John. (Acadian-Tribune Photos by Lisa Soileaux)

RAYNE - Veterans, along with special guests and visitors, were welcomed to the 2020 Veterans Day Program held Wednesday, Nov. 11, at the Rayne Veterans Park.
The 11:30 a.m. program was hosted by the Rayne Chamber of Commerce, Rotary Club of Rayne and the City of Rayne.
Serving as mistress of ceremonies was Jennifer Autin, Business Development Coordinator for the Rayne Chamber, who welcomed everyone and thanked all for attending.
The solemn program began with the raising of the U.S. Flag by Boy Scouts of Troop 61, Rayne, who also led the Pledge of Allegiance. The National Anthem was sung by Adelyn Autin and a special prayer was presented.
Autin acknowledged the Rotary Club of Rayne for co-sponsoring the event and their dedication to the men and women who have served our country and protected freedom not just here, but around the world.
She paid a special “thank you” to Jared Lawless, Army veteran, for representing the Rotary and the military.
Autin stated, “Elmer Davis once said ‘This Nation will remain the land of the free, as long as it is the home of the brave”. She continued, “Joseph Campbell has said ‘A Hero is someone who has given his or her life to something bigger than oneself” and Winston Churchill stated ‘Never was so much owed by so many to so few” as she addressed the audience.
Autin continued, “As we celebrate Veteran’s Day here together, let us offer thanks to all who have put their lives on the line for a greater cause; the ones who stood up for every American in chaos, turmoil, war….just so we didn’t have to.”
At this time, all veterans in attendance were asked to approached the podium where they received a traditional Remembrance Poppy; at which point, they stated their named and branch of service.
Acknowledged were Bob Landry - Army, Raylin Alleman - Marines, Michael Pastor - Army, Robert Comeaux - Army, Jared Lawless - Army, Patrick Pellerin - Army, James Montgomery - Marines, Kenneth Autin Sr. - Marines, Brandon Autin - Marines and Lee John - Army.
Comeaux and the late Andrus Fontenot, members of the local Woodmen Life and American Legion, were also recognized as Veterans Park committee members who were responsible for laying the first bricks at the park.
As noted by Autin, the poppy is a common symbol that has been used to represent everything from peace to death and even simply sleep. When used on tombstones, poppies represent eternal sleep. When used in wartime commemorations, red poppies, in particular, are believed to represent respect and solemnity for fallen soldiers.
In addition to thanking everyone for their attendance, Autin expressed special thanks to all who assisted with the special program held to honor local veterans, especially Rayne Chamber board members and the Rotary Club members.
She also extended appreciation to Mayor Chuck Robichaux and the City of Rayne for their help.
Autin concluded, “My challenge for each of you, when you see a service man or woman, stop and tell them thank you for their service. I promise you, they never get tired of hearing it.
“We ask God to continue to bless our country and all of our military including Army, Navy, Marines, Airforce and National Guard. May the presence of God always be with you and your families.”
Following the program, guests were invited to enjoy light refreshments and goody bags provided by the Rotary Club of Rayne.