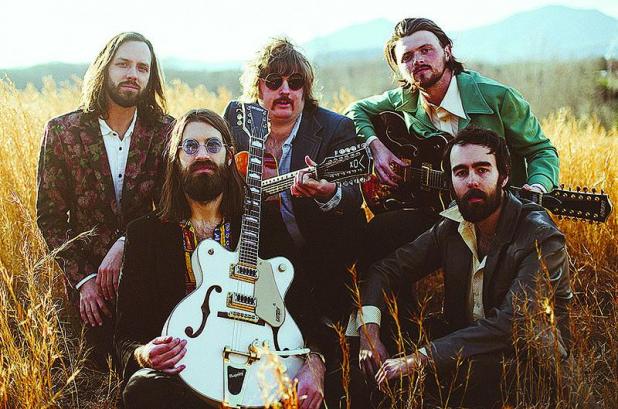 SUBMITTED PHOTO
The Artisanals, a rock / indie band based in Charleston, South Carolina, will perform for the season finale of Greetings From Levy Park Friday night.

The Artisanals, a rock / indie band from Charleston, South Carolina, roll into town Friday for the sixth-season finale of Greetings From Levy Park.
Fronted by Johnny Delaware, the five-piece band’ debut full-length album, released in September, 2018, features spiritual lyrics and Eastern influences reminiscent of George Harrison.
Formed in 2016, The Artisanals dropped their four-track debut EP, “Literally, Anywhere,” a year later and received immediate acclaim, including nods from a number of musical allies, including Dylan LeBlanc and The High Divers, both of whom have performed during this year’s GFLP free concert series.
“The Artisanals bring a real high energy show to the stage,’ said Keeffer Kelbaugh, one of the organizers of GFLP. “And lead singer Johnny Delaware has a powerful set of pipes on him.”
Like The High Divers, who performed last, The Artisanals are very comfortable on the road.
“They’re real road warriors,” Kelbaugh said. “Theyº stay on the road all the time, in fact, they’re just getting back from Europe.”
Opening for The Artisanals will be Mojo Black, a local blues and classic rock band with heavy blues influence.
All of the band members — Rick Hebert (vocals and guitar), Benny Amos (bass), Sammy Reggie III (vocals and harmonica), Gus delaHoussaye (keyboards) and Brandon Faulk (drums) — reside in the Crowley and Indian Bayou area.
“We’re very proud to have them on the stage,” Kelbaugh said of Mojo Black. “They’re the first local band we’ve had opening up. We’re looking forward to them opening for us.”
Kelbaugh described Mojo Black’ music as “retro, with a unique vibe.”
Mojo Black’s unique sound is influenced by the likes of Black Sabbath, Elvis, ZZ Top, Rolling Stones, Procol Harum, Muddy Waters, Jimi Hendrix, Stevie Ray Vaughan and others.
Adding to the “local flavor” for Friday night’s event will be Little Tessie’s food truck from West Crowley.
“We’re really proud to have them for our season finale,” said Kelbaugh.
“They have a pretty good following since they’re out on Second Street every Saturday and Sunday.”
Greetings From Levy Park, founded by Kelbaugh, Kyle Gordon and Amy Thibodeaux, will once again feature local artisans along with a number of vendors offering food and drink for adults and children.
A number of activities also are available for children.