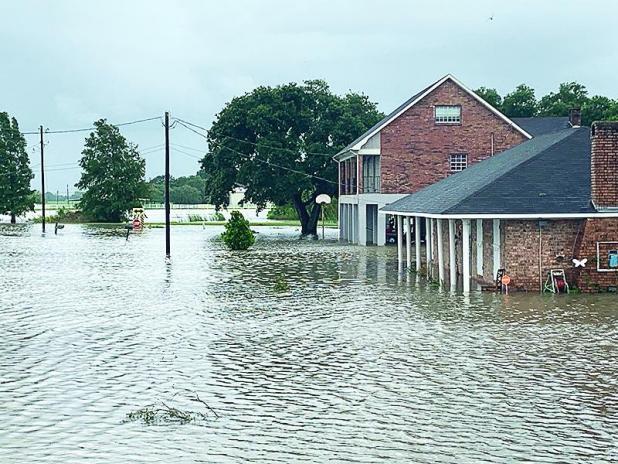 The Atlantic Ocean has spawned lots of storms this season while doing much less damage than prior years. But warming waters promise trouble ahead.
The 2019 Atlantic hurricane season, which ended Nov. 30, has been the eighth most-active in named storms based on records going back to 1851. So far, it has caused about $13.9 billion in damage across the basin, well below the estimated $50 billion from last year and the $220 billion in 2017.
What’s becoming clear, though, is that some systems have been slowing down, resulting in much heavier rainfalls even when they are weaker. Among those that made landfall in the U.S., the one that had the most impact — Tropical Storm Imelda — was also the weakest. It caused $2 billion in damages when it flooded Texas in September, according to Chuck Watson, a catastrophe modeler with Enki Research.
Slow-moving systems that drop torrential rains “are kind of the harbingers of the future” as climate change makes itself felt, said Jeff Masters, a meteorologist who writes for Scientific American.
Hurricane Barry, which caused about $1 billion in damage when it struck the Gulf of Mexico coast in July, set the all-time rainfall record in Arkansas, he said.
It was the fifth state record broken by a tropical system in the last three years.
Slower-moving storms soak up more moisture from warmer oceans and dump more rainfall as a result. The danger isn’t just limited to downpours. Dorian — a Category 5 monster — stalled out over the Bahamas for more than 36 hours, killing almost 70 and leaving Grand Bahama island wrecked.
Systems also intensified in areas where they typically don’t. “We’re starting to see unusual sort of intensities in unusual places, which is something we would expect to see as the oceans heat up,” said Masters. Strong storms developed in the far eastern Atlantic and three threatened Europe.
As for Dorian, its 185 miles per hour winds matched the 1935 Labor Day Hurricane as the strongest to hit in the Atlantic. Total economic losses for the Bahamas are at about $7 billion, more than half of the country’s gross national product, according to the United Nations ReliefWeb.
“There has never been a land area, or even open ocean, that was hit harder for a longer period of time than what Dorian did to the northern Bahamas,” said Ryan Truchelut, president of WeatherTiger.
Florida was spared when Dorian turned away from the peninsula and began its trek just off the U.S. East Coast until it struck North Carolina’s Outer Banks in a weakened state, Truchelut said. It was one of the three storms — along with Barry and Imelda — that struck the U.S. in 2019. Four made landfall in the last season.
“Talking about Imelda, for the U.S., it will probably be the most damaging storm of the year even though two hurricanes made landfall,” said Phil Klotzbach, a researcher at Colorado State University. “It was only a storm about 90 minutes before landfall. It just barely made it over the line.”
Basinwide, through Friday, 18 storms were named in the Atlantic, placing 2019 in the top-eight most-active years, according to Weather Underground, an IBM company. In 2005, a record 28 storms raged in the Atlantic including Hurricane Katrina, which devastated New Orleans. For the latest season, the National Oceanic and Atmospheric Administration forecast 10 to 17 systems, and Colorado State University predicted 14.
“It was a fairly active season, but the U.S. dodged the hurricane bullet,” Jim Rouiller, chief meteorologist at the Energy Weather Group. “We didn’t see a Maria or a Michael or something like that.”
In 2017 and 2018, the U.S. was torn up by hurricanes Harvey, Florence, Maria, Irma and Michael, with the storms flooding Texas, devastating Puerto Rico and causing widespread damage across Florida and the Carolinas.