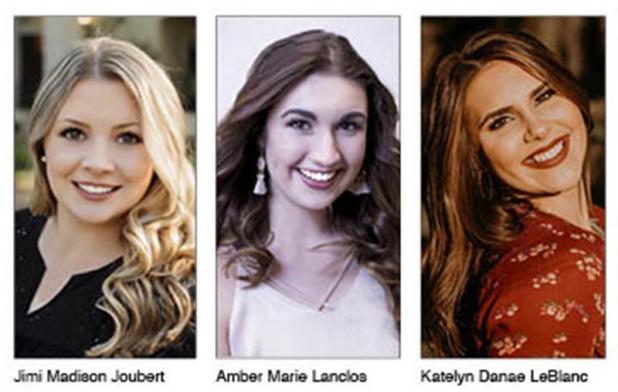 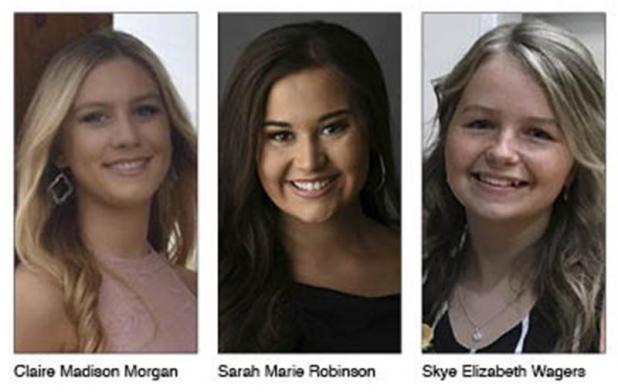 The contestants vying for the title of 83rd International Rice Festival Queen have been announced.
The Queen’s Pageant will begin at 10:15 a.m. on Saturday, Oct. 19, at the Supreme Rice Sound Stage located on the courthouse grounds.
This year’s contestants are:
• Jimi Madison Joubert is the 20-year-old daughter of John and Kellie Joubert of Opelousas. Currently a student at the University of Louisiana at Lafayette, she plans to graduate in May of 2021 with a degree in accounting. She is currently employed as an intern at the CPA firm of Kolder, Slaven & Co., LLC, and manages her parents’ crawfish drive-thru during crawfish season.
Jimi is a pre-member of Beta Alpha Psi, an accounting honor society, and has a 3.4 college GPA. During her high school years, she placed from local to national levels in 4-H livestock shows and FFA livestock competitions. She also lettered in soccer all four years of high school and won parish and district recognition. She is a volunteer for the City of Eunice and was a tutor to special education students. She loves being at her family’s crawfish farm and in the kitchen with her mom. She also enjoys doing tax returns, Hobby Lobby trips and decorating for the holidays. Her goals for the future are to graduate, become a CPA and be a partner in a firm.
Her sponsor for this year is A-Cajun Crawfish House.
• Amber Marie Lanclos is the 19-year-old daughter of Blaine and Jill Lanclos of Franklin. She is currently a student at Nicholls State University majoring in sociology with a concentration in social work, and she plans to graduate in 2022.
Amber is a member of Chi Alpha, has participated in mission projects and has volunteered at the nursing home. Her honors and awards include the For Our Future Scholarship, the TOPS Scholarship, being named Student of the Month and winning St. Mary’s Got Talent. Amber has been a church volunteer and vocalist, is active in her hometown theatre and has participated in Relay-for-Life events.
Her hobbies and interests include singing, spending time with her family and friends and trying new restaurants across the state. She is passionate about advocating for people and her Cajun culture by promoting agricultural work and festival celebrations.
Amber’s sponsor is Star-Tech Marine Electronics.
• Katelyn Danae LeBlanc is the 20-year-old daughter of Danielle Trahan and Yates LeBlanc of Morse. She is currently a student at the University of Louisiana at Lafayette majoring in pre-professional studies in exercise science with plans to graduate in 2021. Katelyn is employed by UL Special Services and Crowley CrossFit.
During her high school years, Katelyn was involved in Beta, Student Council and FFA. She is currently a member of Ragin Cajun Catholics and KPA. Her honors and awards include the Linton Sarver Award, the UL Distinguished Freshman Scholarship and the American Legion Award. A member of our Lady of Wisdom Catholic Church, Katelyn enjoys all things fitness and shadowing physicians to learn more about her future career. She is also interested in livestock and pushing others to achieve their fitness goals.
Katelyn is representing the City of Crowley and is sponsored by the Crowley Professional Women’s Club.
• Claire Madison Morgan is the 18-year-old daughter of Jeffery and Wendy Morgan of Egan. She is currently a senior at Iota High School and is employed as an after-school caregiver. Claire is a member of the 4-H Club, Student Council, Beta and Renaissance, and she is involved with showing cattle. She has received many awards for her cattle showmanship including the Iota High Premier Beef Exhibitor and has also received the Egan Community Center Scholarship.
During the summer, she assisted with Bible School and has also volunteered with cleaning the local cemetery. Claire’s hobbies and interests include traveling, hunting, fishing and spending time with family and friends. She is a member of St. Joseph Catholic Church in Iota and after high school plans to continue her education and major in nursing.
Claire is representing the Atchafalaya Basin Festival.
• Sarah Marie Robinson is the 19-year-old daughter of Nate and Heidi Henderson of Rector, Arkansas, and the late Josh Robinson. She is currently a student at Arkansas State University majoring in nursing with plans to graduate in 2022. Sarah is also employed as a bank teller with Centennial Bank.
She has held membership in several clubs including FBLA, the Spanish Club, Student Council and the National Honor Society. Her honors and awards include being the recipient of the Citizenship Award and the Arkansas Academic Challenge Scholarship. She is a volunteer for the Rector Athletic Department, the City of Rector, Helping Hands 5K and the Rector First Baptist Church. Sarah enjoys shopping, practicing makeup application, riding ATVs and cooking. She has also experienced mission trips to Guatemala which makes her appreciate all that she has here in the United States.
Sarah’s sponsor is the Arkansas Rice Festival.
• Skye Elizabeth Wagers is the 18-year-old daughter of Sherry Howerton and Joey Wagers of Crowley. She is currently a senior at Crowley High School and after graduation plans to attend Louisiana State University at Eunice and major in nursing.
Skye is a member of FCCLA, on the newspaper staff and participates in Student Council. She has been named to the Honor Roll, has been awarded Student of the Month and has received the Hardest Working Student Award. Her hobbies include kayaking, reading, fishing, hiking and attending festival and cultural events.
Her sponsor is the Rayne Frog Festival.
Contestants will be judged in interview and stage presentation.
Crowning the new International Rice Festival Queen will be 2019 Festival Honoree Thibodeaux Ag Group.
The 83rd International Rice Festival Queen will be presented with cash scholarships and will represent the International Rice Festival at the Washington, D.C., Mardi Gras Ball and the Rice Millers Association Convention.