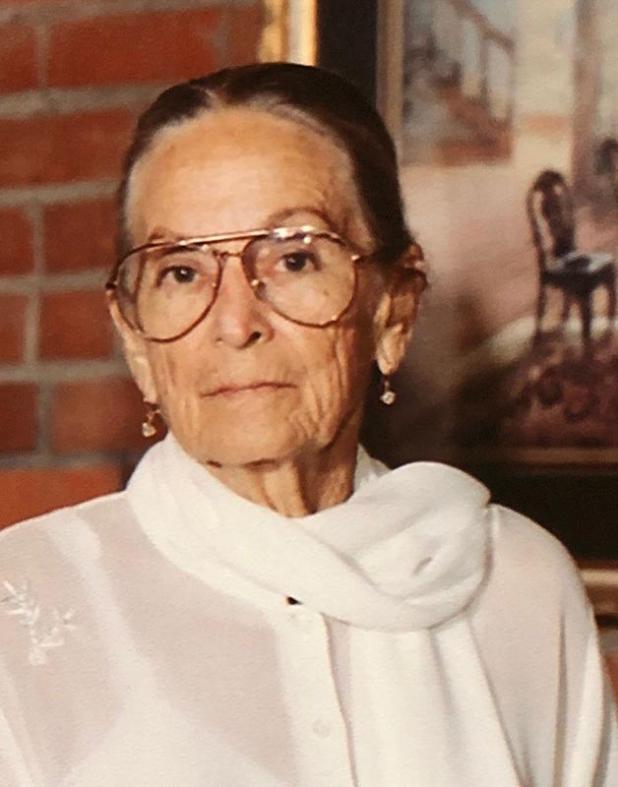 August 29, 1927 ~ October 7, 2019
A Mass of Christian Burial for Mona Hemphill Hollier, 92, will be held Friday, Oct. 11, at noon at Our Lady of Lourdes Catholic Church, with Msgr. Charles Dubois officiating.
The family is requesting visiting hours to be held Friday, Oct. 11, from 10 a.m. until time of services at Our Lady of Lourdes Church Hall (adjacent to church).
Interment will follow in Our Lady of Lourdes Catholic Cemetery.
Mrs. Hollier was an avid reader, opera buff, traveler, and enjoyed everything in nature including flowers, trees, animals, birds, mushrooms and insects. She had a camp on the Chene Canal and spent many a day crabbing, fishing, cast netting — putting her boat in and out of the water at the Jean-Marie Landing by herself.
She was an Official Court Reporter for Judge Bradford Ware in Acadia Parish and was also an abstractor in parishes statewide as she enjoyed traveling the great state of Louisiana.
She was involved in several historical societies and her knowledge of the state was exponential. She was a lifelong member of the Louisiana Historical Association and a longtime member of the Louisiana Historical Society in New Orleans.
Survivors include her husband Karl B. Hollier; her two sons, Scott Hollier of Abbeville and Neil Hollier of Eureka, California; daughter, Karla Hollier Youngblood of Atlanta, Georgia, and husband Gary; her grandchildren Mica Hollier Toups and husband Carl, Natalie Hollier Sonnier and husband Brandon, Summer Christine Youngblood of Jacksonville, Florida, and Nicholas Youngblood and wife Christina of Atlanta, Georgia; daughter-in-law, Susie B. Hollier; great-grandchildren including Raleigh, Andre, Avery and Phillip Toups; Meredith, Molly and Mya Sonnier; Sophia, Jaxon and Maddox Youngblood; and a very special niece, Maxine Bonnet Symmes and husband Greg of Lafayette.
Mrs. Hollier was preceded in death by her parents, Frank Hemphill Sr. and Alida Dubois Hemphill; her brother, Frank Hemphill Jr.; and sister, Maxine Hemphill Bonnet; and her son, John B. Hollier.
In lieu of flowers, the family is requesting that donations be made to the Louisiana Historical Society in memory of Ms. Mona Hollier, 2826 St. Charles Ave., New Orleans, LA 70115.
Condolences may be sent to the family at www.vincent funeral home.net.
All funeral arrangements are being conducted by Vincent Funeral Home of Abbeville, (337) 893-4661.