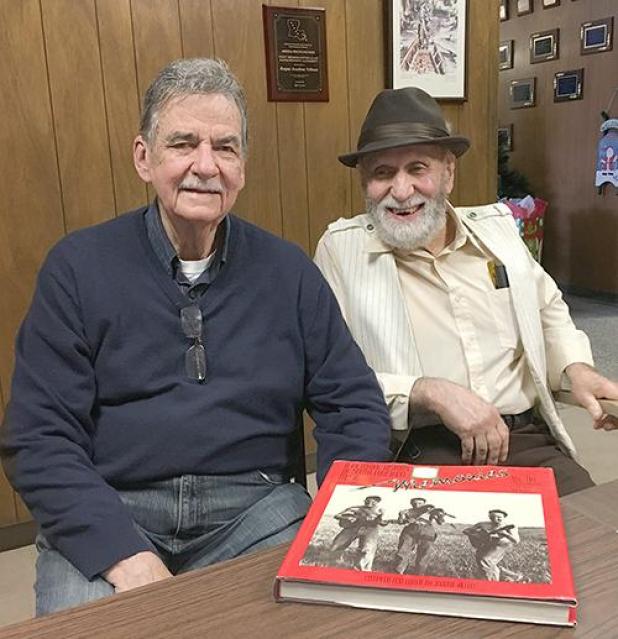 Valery “VJ” Boulet, left, and Bobby (Elwood “Boogas” Dugas) Page of the original “Bobby Page and the Rift Rafts” display one of many books and pictorials which include the band. (Acadian-Tribune Photo by Lisa Soileaux)

RAYNE - Picture it, the late 1950s and early 60s, when the music world was turned upside down.
Hips were shaking and the beat of songs was in high gear as rock and roll was taking over radio stations, whether listeners wanted it or not.
One local band, Bobby Page and the Riff Raffs, seven high schoolers and eventual Rayne High graduates, began their epic musical journey at that time. And, 60 years later, their songs are still being heard; but this time, on the big screen.
“We were watching the credits and we saw our name,” said Valery “VJ” Boulet of when he and band member Elwood “Boogas” Dugas (stage name of Bobby Page) watched the movie “The Green Book.”
“Most people don’t watch the credits — that’s usually when everyone leaves the theater,” continued Boulet. “But, not for us. We were staying put to see our name up there, all this time, 60 years after we recorded the songs.”
Not one, but three songs by the Acadiana band were included in a movie, but one, “I Love My Baby” is the most prominent song highlighted during one of the car scenes.
“I Love My Baby” was written by Boulet while the group was still in high school in the 50s and performed by Bobby Page & the Riff Raffs. But, the duo was very surprised of it’s selection for the movie.
“One of the first times we sang that song was at the FBLA Convention held in Alexandria,” Boulet remembers.
“That was what we thought were the glory days for us,” Boulet said as he reminisced of the group’s simple beginning.
“Mrs. Richard, the Rayne High School home economics teacher, helped sponsor us to make the trip. We performed in front of hundreds of high school girls — that was something. I think that was when we were hooked.”
The other songs of the group included in the movie were “Tired of Hanging Around” written by Ernie Suarez, better know as Roy “Boogie Boy” Perkins, and Harry Simoneaux, along with “Bada” written by Roland Granger.
“You know of all the songs out there,” said Page, “they picked these. That’s just amazing and lucky on our part in a sense.”
But, this is not the first time a song of the group has been selected for a movie. “I Love My Baby” was also include in “The Common Man” nine years ago.”
“We were just coming off of Cloud 9 from our music being included in ‘The Common Man,’ then this happens,” laughed Boulet. “You just never know what the future brings. As they say, ‘That’s show business.’”
Both Boulet and Page have enjoyed successful music careers and both are listed in both the Louisiana and Swamp-Pop Hall of Fame. Boulet is also listed as a song writer.
The movie “Green Book” follows a working-class Italian-American bouncer who becomes the driver of an African-American classical pianist on a tour of venues through the 1960s American South. The movie which was released in late 2018 stars Mahershala Ali and Viggo Mortensen.
The film is named after “The Negro Motorist Green Book,” a mid-20th century guidebook for African-American travelers written by Victor Hugo Green, to help them find motels and restaurants that would accept them.
For nearly 30 years, the guide provided African Americans with advice on safe places to eat and sleep when they traveled through the Jim Crow-era United States.
The film has received numerous award nominations, including winning Best Motion Picture / Musical or Comedy, Best Screenplay and Best Supporting Actor (Ali) at the 76th Golden Globe Awards.
It was also noted the film was nominated for the upcoming Oscars.