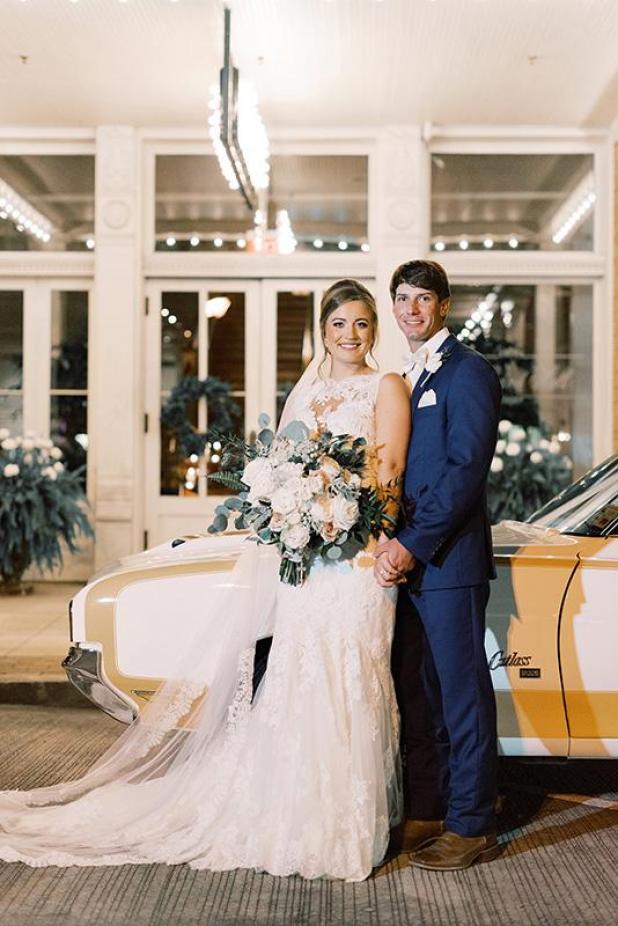 Joselynn Ann Cramer and Colin Albert Mancuso were united in holy matrimony at St. Michael the Archangel Catholic Church in Crowley.
The 6:30 p.m. ceremony was celebrated by Fr. Brent Smith on Saturday, Sept. 28, 2019.
The bride is the daughter of Carl Cramer of Baton Rouge and Barbara Cramer of Crowley. Her maternal grandparents are Joyce Leleux Habetz of Roberts Cove and the late Anton Theodore Habetz. Her paternal grandparents are Lawrence and Mary Cramer of Branch.
She is a 2010 graduate of Notre Dame High School of Acadia Parish and a 2014 graduate of LSU in Baton Rouge, where she was a member of the Delta Zeta Sorority. In 2019, she received a master’s degree in occupational therapy from LSU Health Sciences Center in Shreveport. She is currently employed at Our Lady of the Lake Hospital in Baton Rouge as an occupational therapist.
The groom is the son of Albert Mancuso and Cindy Mancuso of Robert. His maternal grandparents are Gerald and Martha Simmons of Zachary, and his paternal grandparents are the late Albert and Rose Mancuso of New Orleans.
He is a 2010 graduate of Catholic High School in Baton Rouge and a 2015 graduate of Southeastern in Hammond, where he earned a degree in construction management. He is currently employed at Cajun Industries in Baton Rouge as a project manager.
Escorted to the altar by her father, the bride was beautiful in an elegant off white gown of lace, tulle and satin, taking center stage in this romantic mermaid dress with an illusion neckline. A bodice that blended into the skin creating a tattoo effect was fitted to the waist with a discreet belt leading to a magnificent skirt flowing into a cathedral length train. The gown’s plunging back, edged in lace, could be seen through the bride’s cathedral length veil, which was edged halfway down its length with Alençon lace.
Joselynn carried a garden gathered style bouquet, wrapped in satin ribbon, consisting of white standard and O’Hara garden roses, quicksand roses, dusty miller, various eucalyptuses and a coordinating mixture of greenery.
In keeping with tradition, she wore her mother’s diamond bracelet as something borrowed, her mother’s sapphire ring as something blue and her wedding gown as something new. Something old was her maternal grandmother’s rosary, which was placed within her bouquet.
Elizabeth Guidry, high school friend of the bride, served as the maid of honor. Emily Broussard Stutes, childhood best friend of the bride, served as the matron of honor. Bridesmaids were Natalie John, childhood best friend of the bride, and Katie Long, Maureen Quern, Kristen G. Farrington and Catherine Poche’, sorority sisters of the bride. Abigail Landry, sister of the bride, served as junior bridesmaid.
The bridal attendants wore full length gowns of dusty rose in two different styles. One was a full length V neck sleeveless dress with crisscross back detailing that added an intriguing touch. The gorgeous matte chiffon dress featured a trumpet skirt with a side front slit and an inset midriff at the natural waistline. The other was a full length off the shoulder matte chiffon dress with a crossover draped ruffle detail at both the front and back of the bodice and a trumpet skirt with a side front slit.
The attendants carried flowers coordinating with the bridal bouquet. All of the flowers were handcrafted by the bride’s aunt, Angela Landry of Crowley.
Kyle Mancuso, brother of the groom, served as best man. Standing as groomsmen were Jacob Cramer, brother of the bride; Cody LeBlanc, Taylor Greenblatt, Patrick Bourgoyne and Scott Ashford, high school friends of the groom; and Wesley Abney, college friend of the groom. Eli Cramer, brother of the bride, served as junior groomsman.
Guests were ushered to their seats by Christian Landry, brother-in-law of the groom, and Chase Fresina, high school friend of the groom.
The men were attired in French blue suits, with the groom wearing an ivory bow tie and the remainder of his party in dusty rose bow ties.
Annalyn Cramer, niece of the bride and godchild of the groom, served as flower girl, and Gabriel Cramer, nephew and godchild of the bride, served as ring bearer.
Selected scriptures were read by Kerry Kilgore, godfather of the bride, and Ashley Whitlow, college friend of the bride.
The reception for the newly-married Mr. and Mrs. Colin Mancuso was held at the Grand Opera House. The historic venue set the stage for a beautiful candlelight gathering. The tables in the hall were draped with ivory linens and topped with votive candles with arrangements of hydrangeas, roses and greenery. A vintage hutch was decorated with ferns, votive candles, pictures of the couple and German steins representing the German heritage of the bride. A large, framed bridal portrait was displayed next to the guest registry table along with a framed crochet piece featuring the Mancuso name made by the bride’s aunt, Monica Miller. There was also a framed portrait of the couple next to the gift table. The stairs of the Opera House were lined on each side with candles and greenery.
The bride’s three-tiered cake was iced in butter cream and filled with strawberry, cream cheese and butter cream icing. Flowers cascaded down the side of the cake, which was surrounded at its base by the bridal attendants’ flowers. The cake was served by Bonnie Foreman, godmother of the bride.
Prior to the wedding, a rehearsal dinner was hosted by the groom’s parents in the Opera House Grand Ballroom with the help of Deborah Duvic, Faye Ayers and Sandy Clement. Guests enjoyed bacon-wrapped pork tenderloin, pepper-crusted prime rib and grilled tilapia with seafood sauce, along with spring mixed salad with raspberry balsamic vinaigrette dressing, stuffed potato casserole, French green beans and Godiva bread pudding for dessert.
After enjoying their honeymoon to St. Lucia, the newlywed couple is making their home in Baton Rouge.