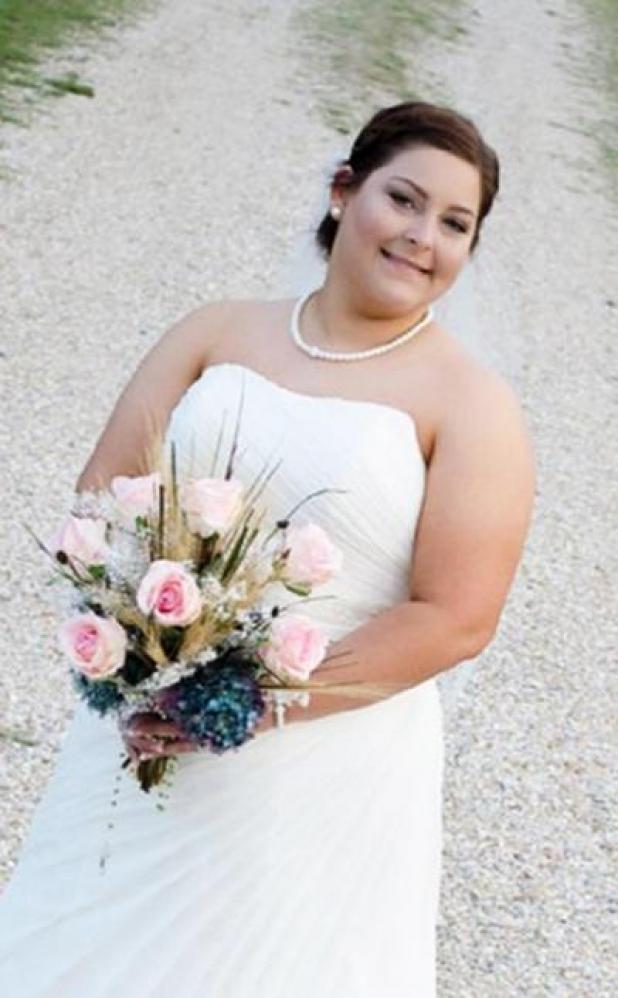 RAYNE - A six-thirty evening wedding ceremony on Saturday, August 5, 2017, at the American Legion Home united Brittany Boudreaux of Rayne and Alex Bourque of Breaux Bridge in marriage. Rev. Jimmy Broussard officiated the double-ring ceremony.
The bride is the daughter of John and Rebecca Boudreaux of Rayne. Her grandparents were the late Mr. and Mrs. Earl Dupont of Rayne and the late Mr. and Mrs. Hilbert Boudreaux of Church Point.
The groom is the son of Michael and Melissa Bourque of Breaux Bridge. His grandarents are Mr. and Mrs. Harry Bourque Sr. of Lafayette, Ethel Thibodeaux of S. Petersburg, Florida, Ernest Romero of New Iberia and Maria Carroll of Breaux Bridge.
Given in marriage by her father, the bride wore an ivory wedding gown designed with a sleeveless sweetheart bodice with ruched styling accented at the waist with a pearl belt from which fell a chapel-length train.
She carried a bridal bouquet of rustic wheat, turquoise, purple and peach roses. Included in the bouquet was her grandmother’s wedding ring and grandfather’s rosary.
Attending the bride as maid of honor was her best friend of 12 years, Ashley Hebert. She wore a floor-length dress in a turquoise tone designed with a one-sleeve styling.
Bridesmaids were Sarah Boudreaux, bride’s sister-in-law, and Ashley Dupont, bride’s cousin. Sarah wore a sleeveless, flowing, knee-length dress of turquoise mesh designed with a sweetheart illusion neckline. Sarah selected a turquoise button-up long-sleeve shirt over jeans with cowboy boots.
Serving as flower girls were Ella Boudreaux, the bride’s niece and daughter of John and Sarah Boudreaux; Amelia Rogers, daughter of bride’s best friend and daughter of Todd Rogers and Ashley Hebert; and Haven Bourque, groom’s niece and daughter of Drake Bourque and Samantha Smith. Each wore a handmade dress created by the groom’s mother.
Attending the groom as best man was his youngest brother, Kale Bourque.
Groomsmen were John Boudreaux Jr, bride’s brother, and Drake Bourque, groom’s oldest brother.
Ringbearers were Braxton and Holden Boudreaux, nephews of the bride and sons of John and Sarah Boudreaux, and Hudson Bourque, groom;s nephew and son of Drake Bourque and Samantha Smith.
Ushing guests were Holden Robichaux and David Green, friends of the groom.
For her daughter’s wedding, the mother of the bride wore a floor-length dress of champagne silk accented with threaded flowers, while the groom’s mother selected a sleeveless, beaded halter gown of navy blue chiffon. Each was presented unique wheat stem bouquets.
The setting for the wedding and reception included rustic burlap, turquoise, wheat, twine, mason jars and deer corn included throughout the legion home and on table tops.
Among the refreshments served to guests was the bride’s cake, a three-tier ivory confection of red velvet cake and butter cream icing. It was topped with a burlap and brown “B” cake topper.
The groom’s cake was funfetti confection featuring a hunting and fishing theme.
Prior to the wedding, a rehearsal dinner was hosted by the groom’s parents on Friday, Aug. 4, at the American Legion Home.
Brittany is a 2005 graduate of Rayne High School, attained a CNA Degree from SLCC Acadian Campus in Crowley, and is employed by Centurion Neuro-Muscular Skeletal, LLC.
Alex attended Academy of Wisdom in Breaux Bridge and is employed by Goldin Metals, Inc.
The couple plan to make their home in Lafayette.